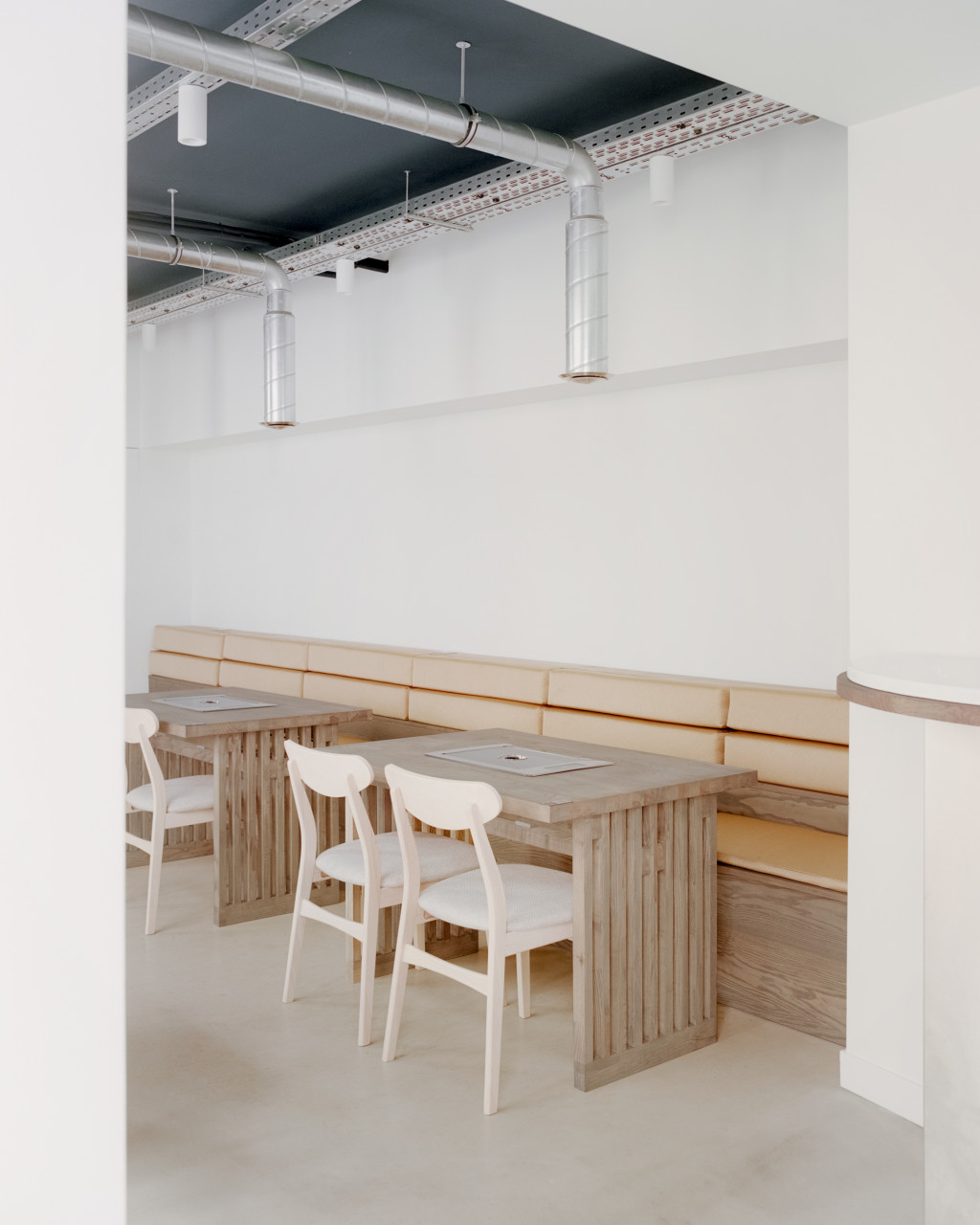 Have you ever dived into deepness ? Inside the stones live the sign of times. The mark of the craftsman shapes the pillar that stands still, over and over the years. It is the strength of the street, the guardian of the entrance. Waves of gray and beige play a static game with light and transform it into motion.  Inside the stone lives the essence of the shades and shapes : a multitude of neutral tones that welcomes the idea of time, amplitude and duration.

Diving in the dull with open eyes allows the curious to appreciate the rough.  And eventually to value it.

Youjung is the association of friends from France and South Korea rallied around the commun idea of a cheerful site in a delicate frame : a traditional South Korean barbecue restaurant combined with a sensitive French art de vivre. The locus takes place in the core of the medieval city of Grenoble, a small metropolis in the heart of the French Alps. Auguste Gaché Street is originally central of the antiquary neighborhood where cabinet makers and ironworkers used to have their atelier. Nowadays, it is still a dynamic area mixing restaurants, bars and craft shops.

We choose minimalism as the mold for profusion. We pushed the benches toward the windows and walls, letting emptiness bring fluidity in the volume in contrast with the throng ballet of the dishes occupying the tables. This move was also motivated by inclusivity, allowing each single being, with every kind of ability and disability to enter, sit and enjoy all part of the space without any restrictions.

Korean barbecues are by definition crowned and hot. The archaic neighborhood is confidential and luxurious. One compliment the other.

The main concept of Korean’s barbecue is to cook your food : every table has a grill to permit this. In consequence, technical airing features cable paths and integrated heated system elegantly hang above the space. The result is a stainless steel web on the ceiling.

We choose to show rather than hide.  We designed the air vents to be minimal, echoing the stainless steel leaves of the bar.

Tables and benches are guarantors of an operating diner.  We developed the set inspired by blurred memories of a childhood and we blended it with an interpretation of a culture. Wood veining and slats repetition shape geometries of warmth.

We pursue two things in architecture : that it shelters us, and that it moves us.

We found profusion in the dull.

The neutral tones of the stone were the basis for the choice of materials. We looked for sincerity, roughness and proximity.

Ash was tainted with vegetable oil and used for all the wooden furniture. Brushed stainless steel brings light inside the space, without transferring the shadows.  Esmalted lava lands on the counter, bright and white. It reflects and transforms deliciously its environment, just as the icing of an inviting cake. Tapestry is tin gold, holding a desaturated glint.

The only touch of contrasting color is the deepsea blue that was brought in from the outside as it is the original color of the gigantic external shutters. It dresses the kitchen, and flows from the ceiling to the window until it touches the concrete floor, and disappears into its gleam. 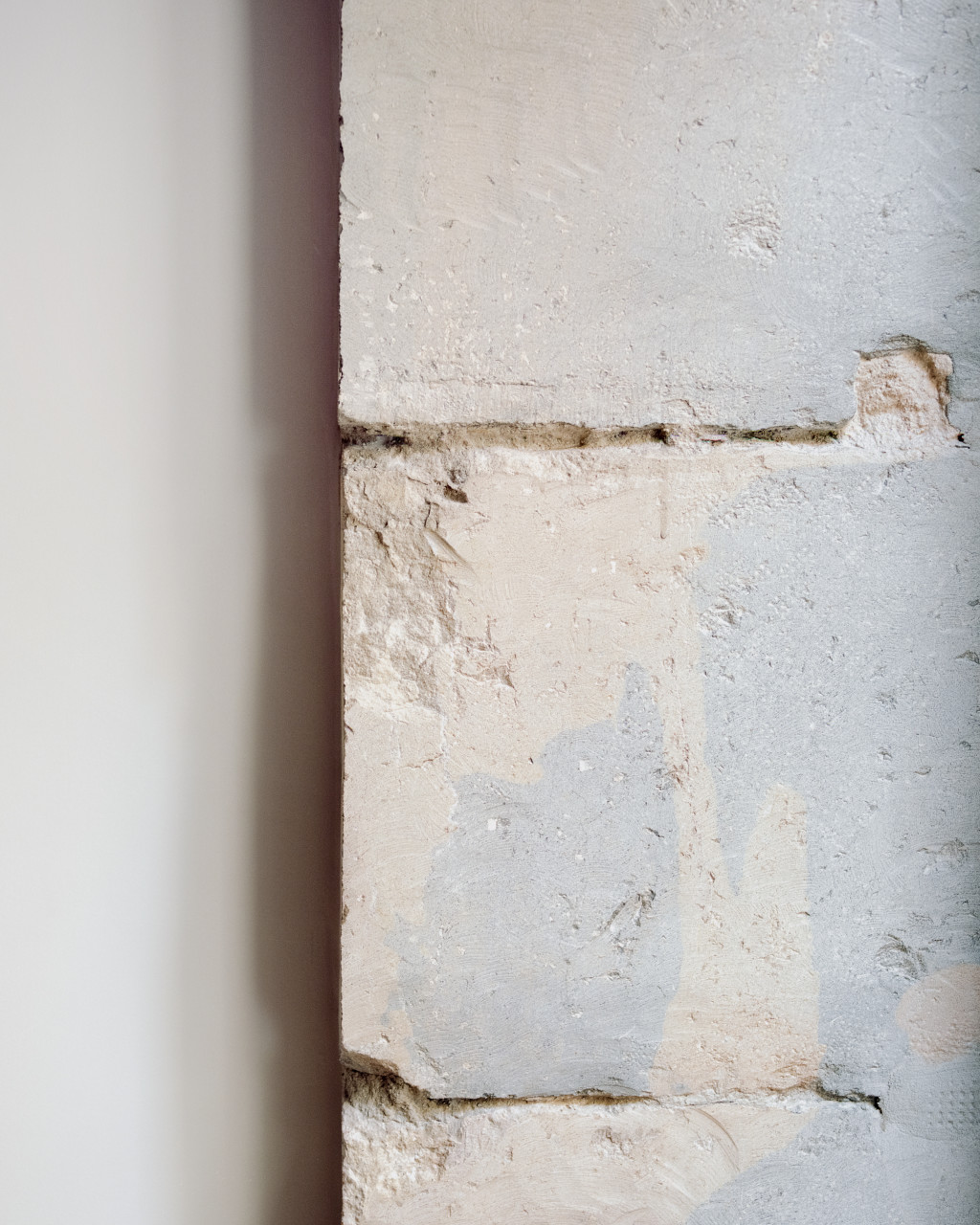 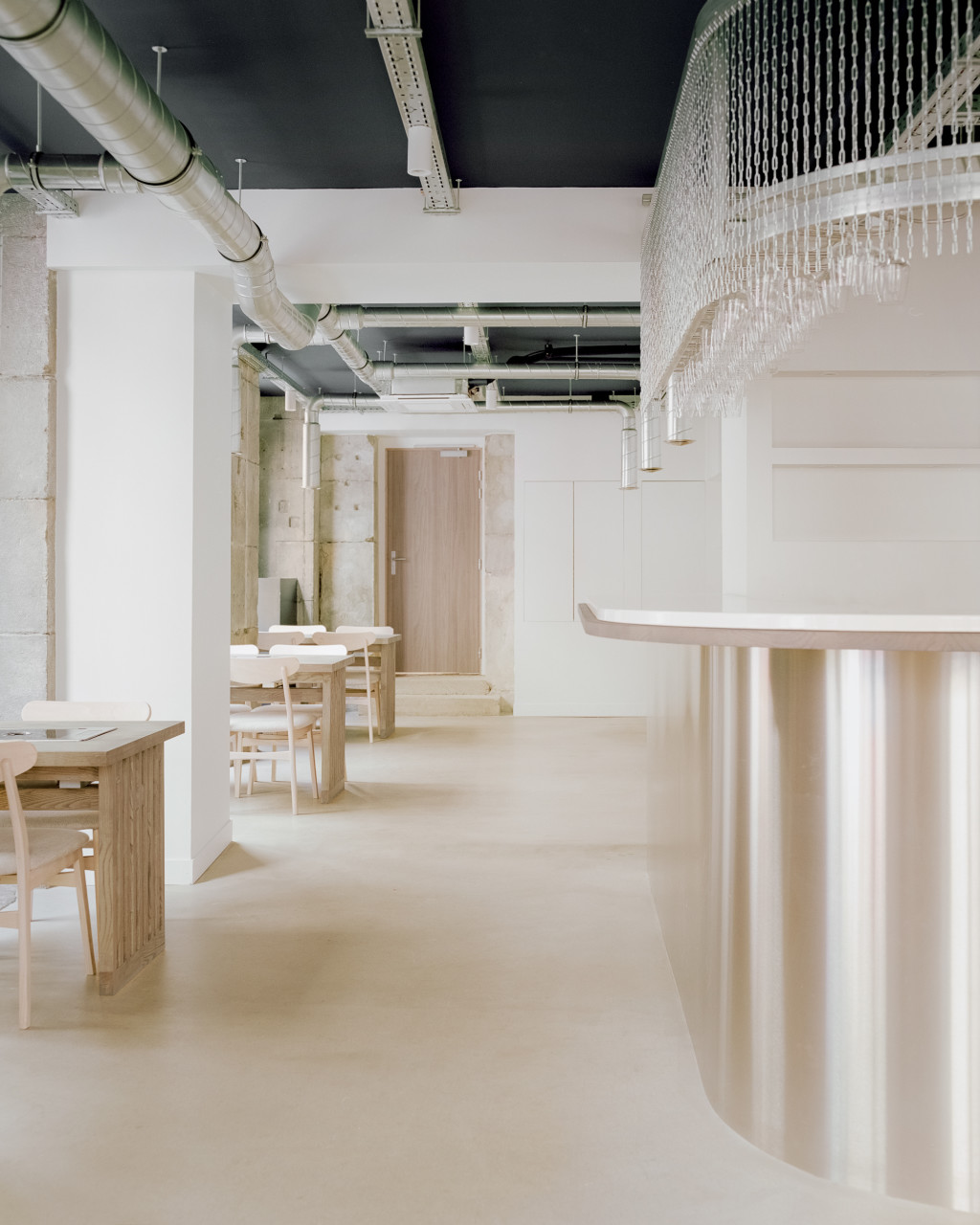 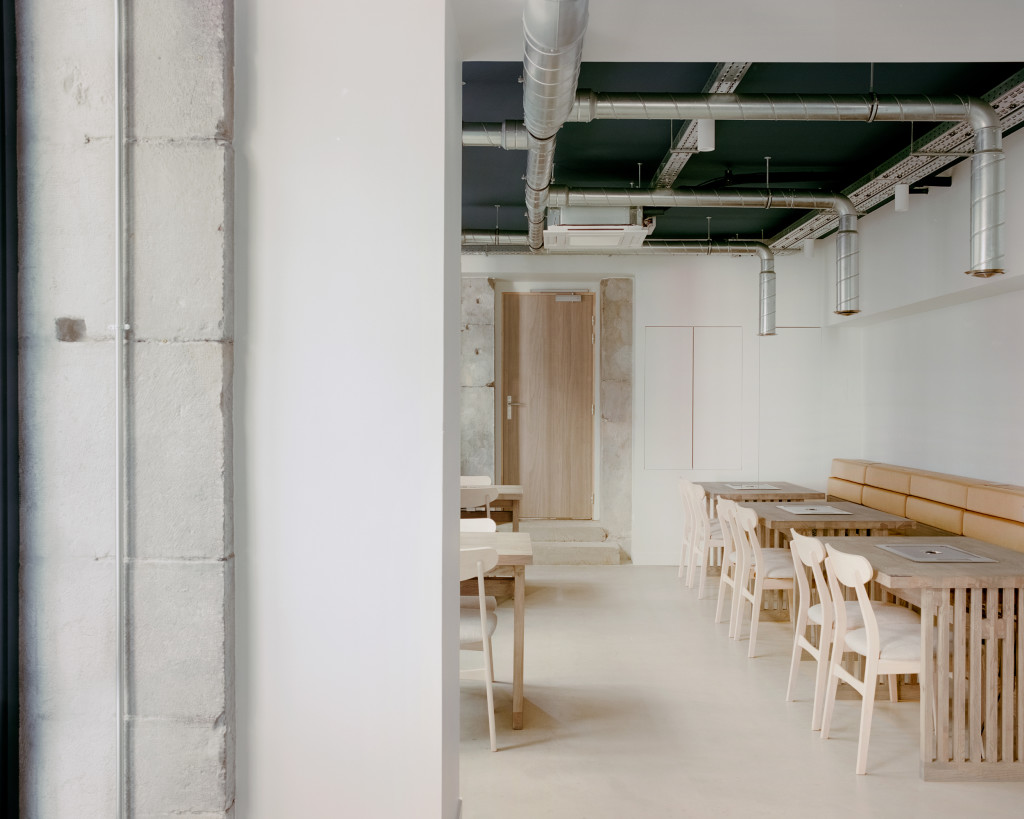 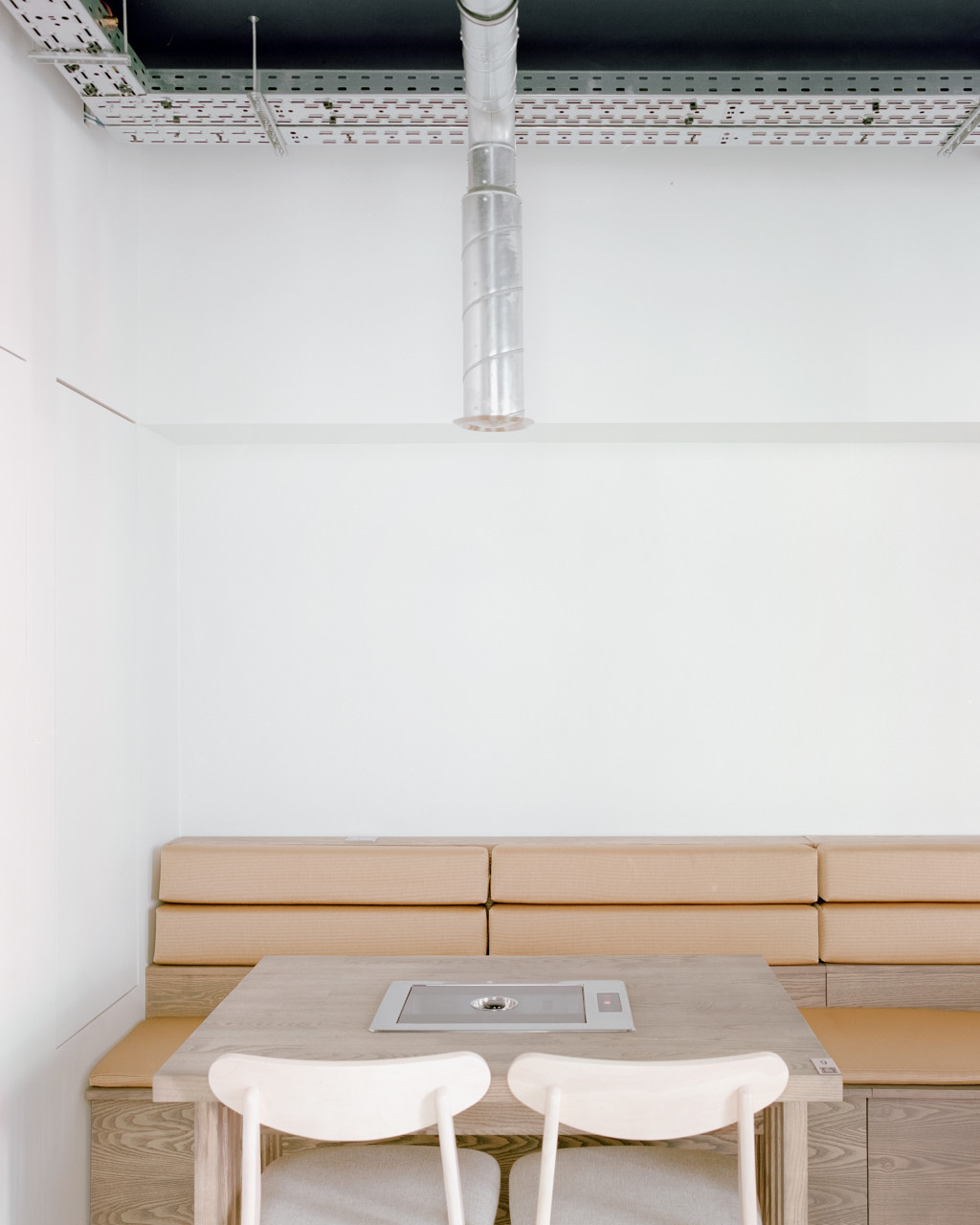 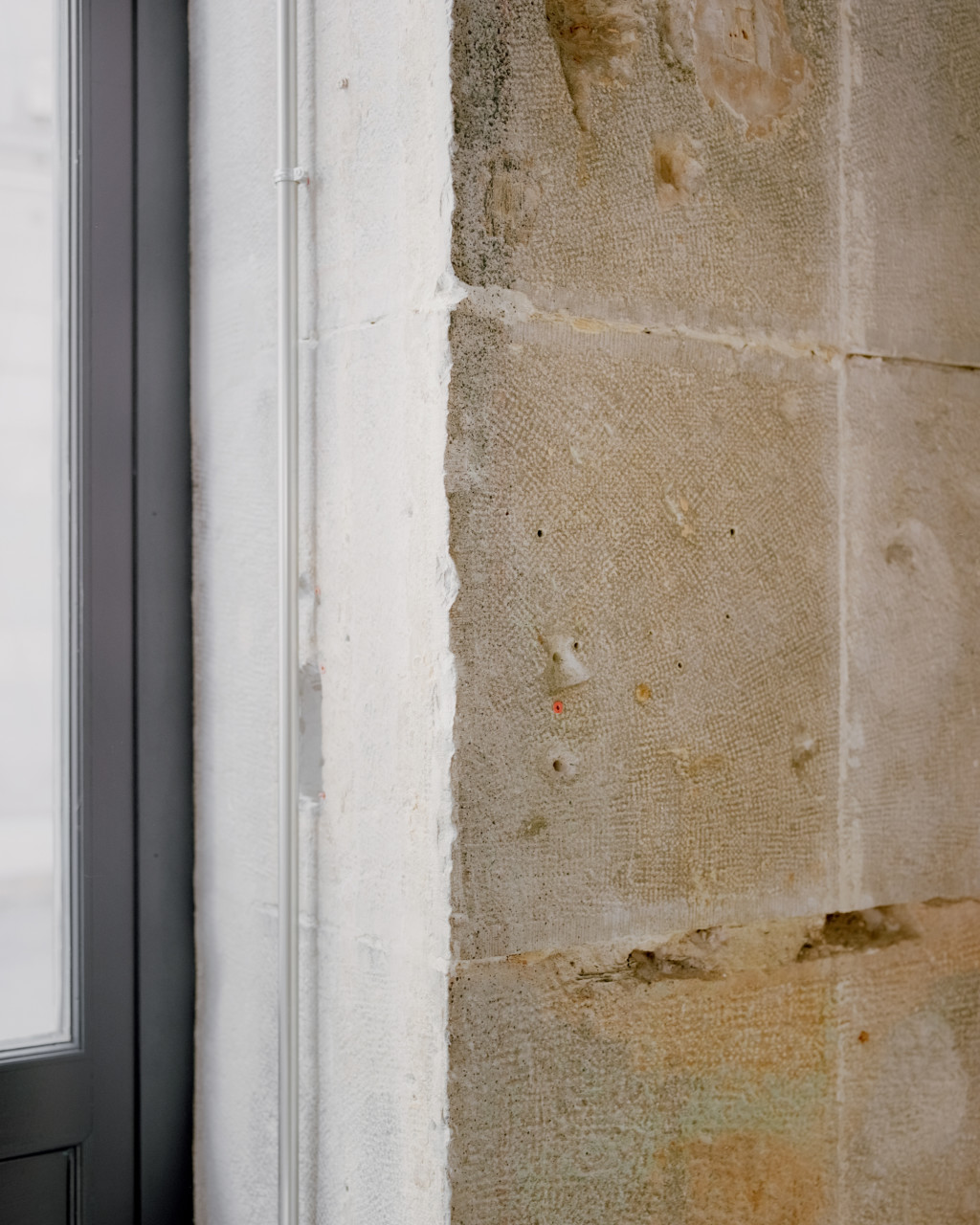 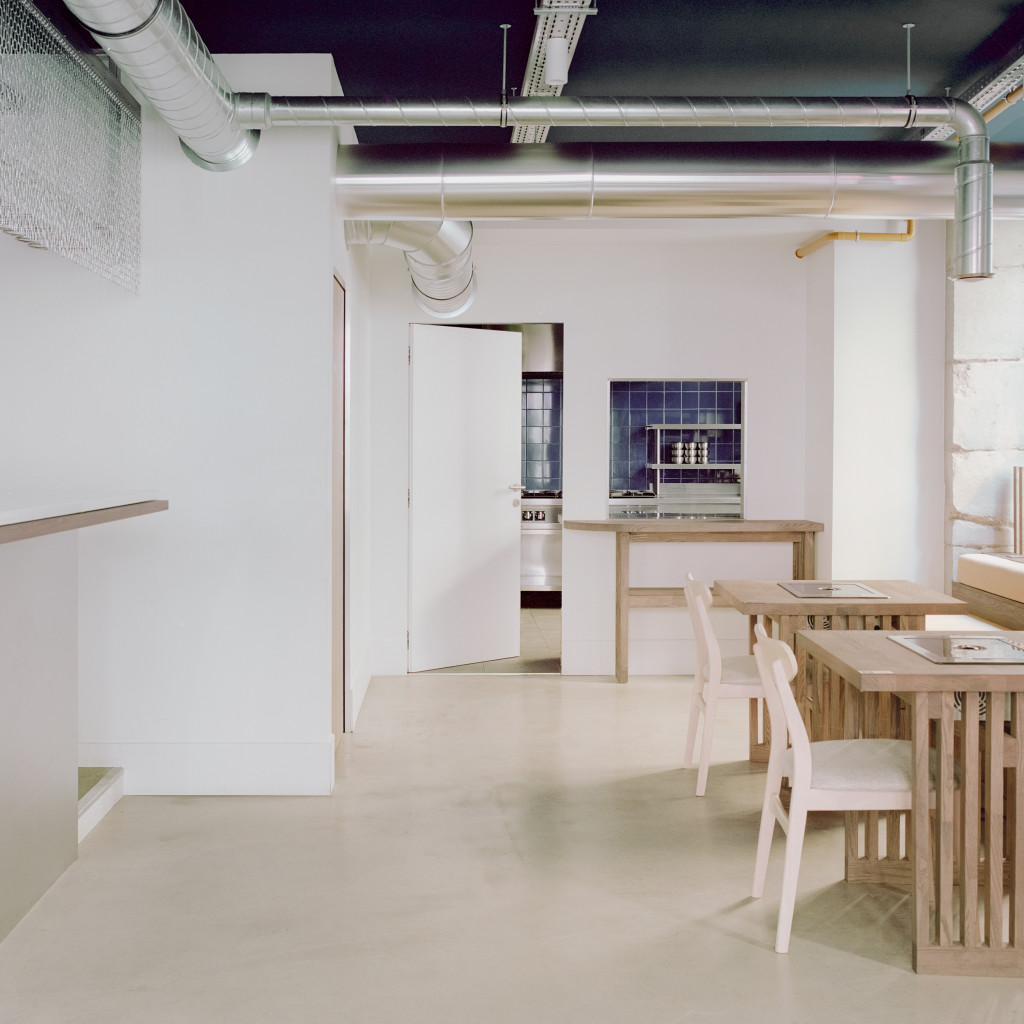 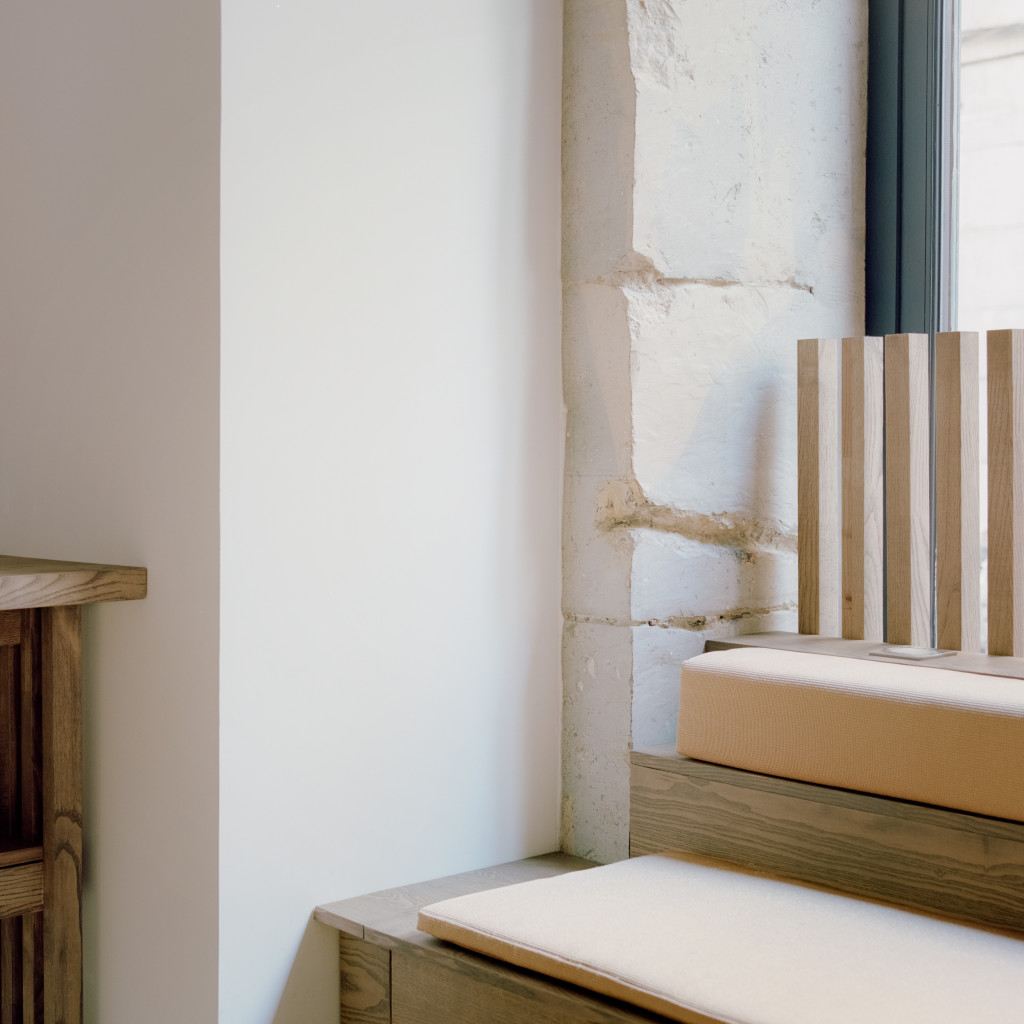 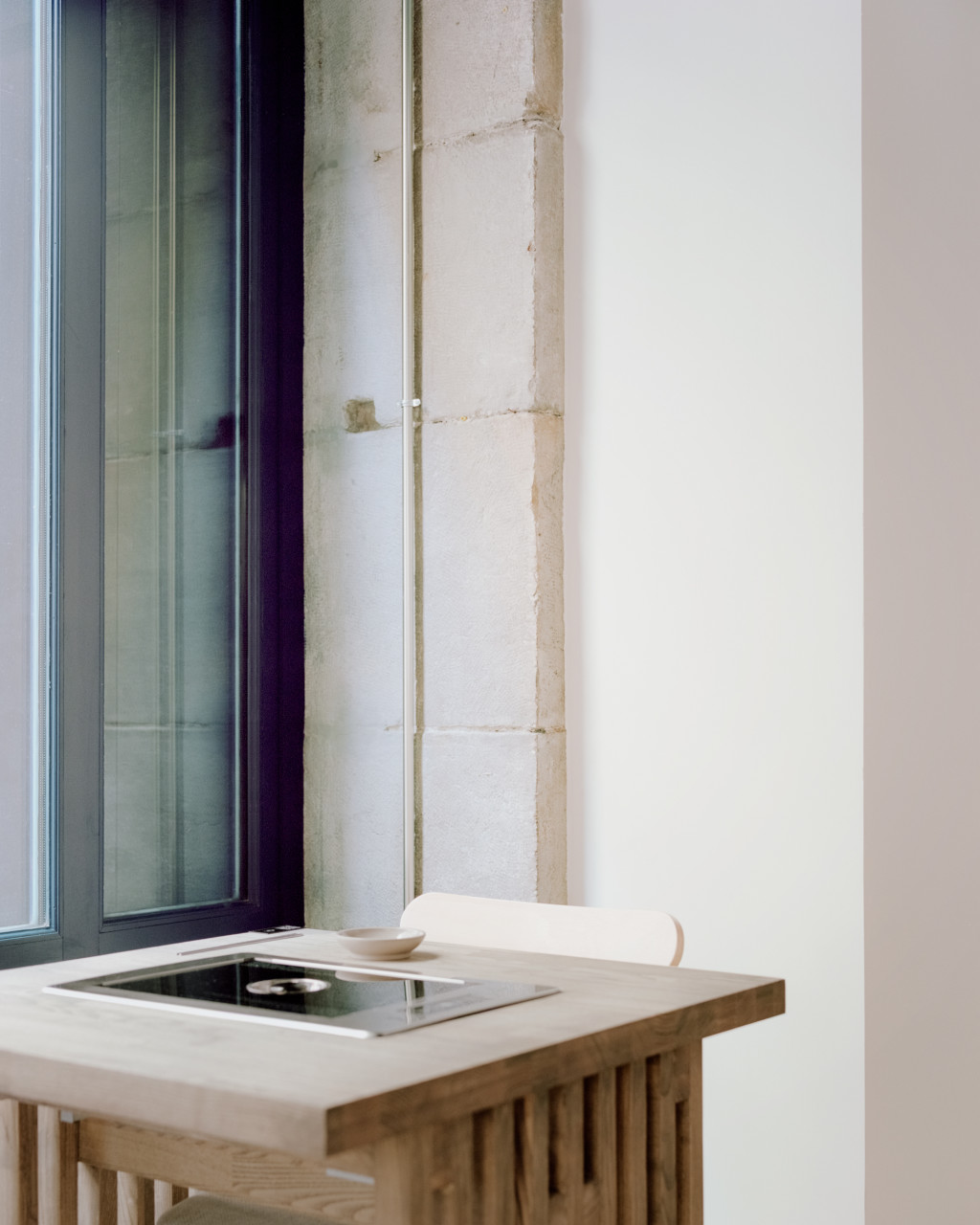 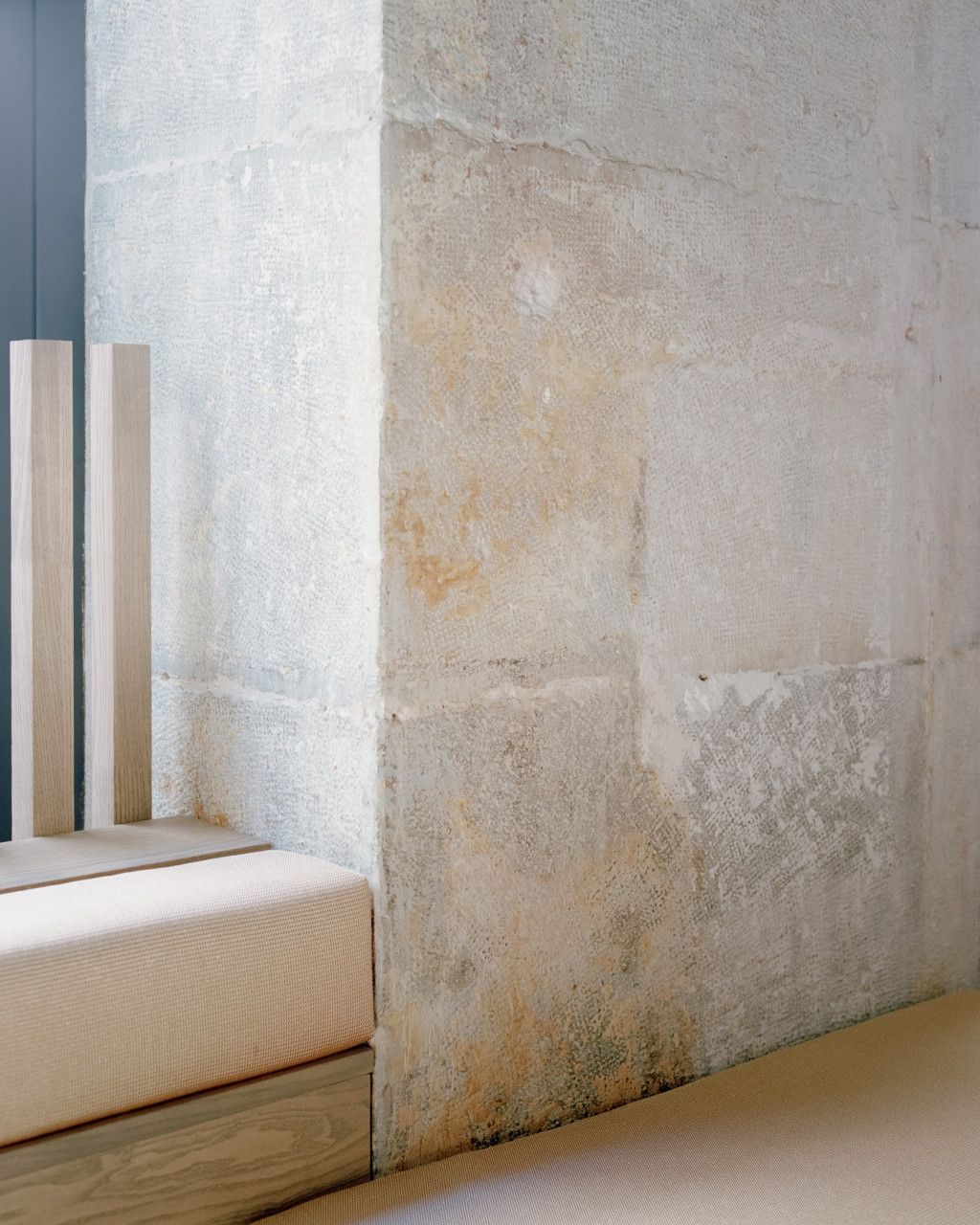 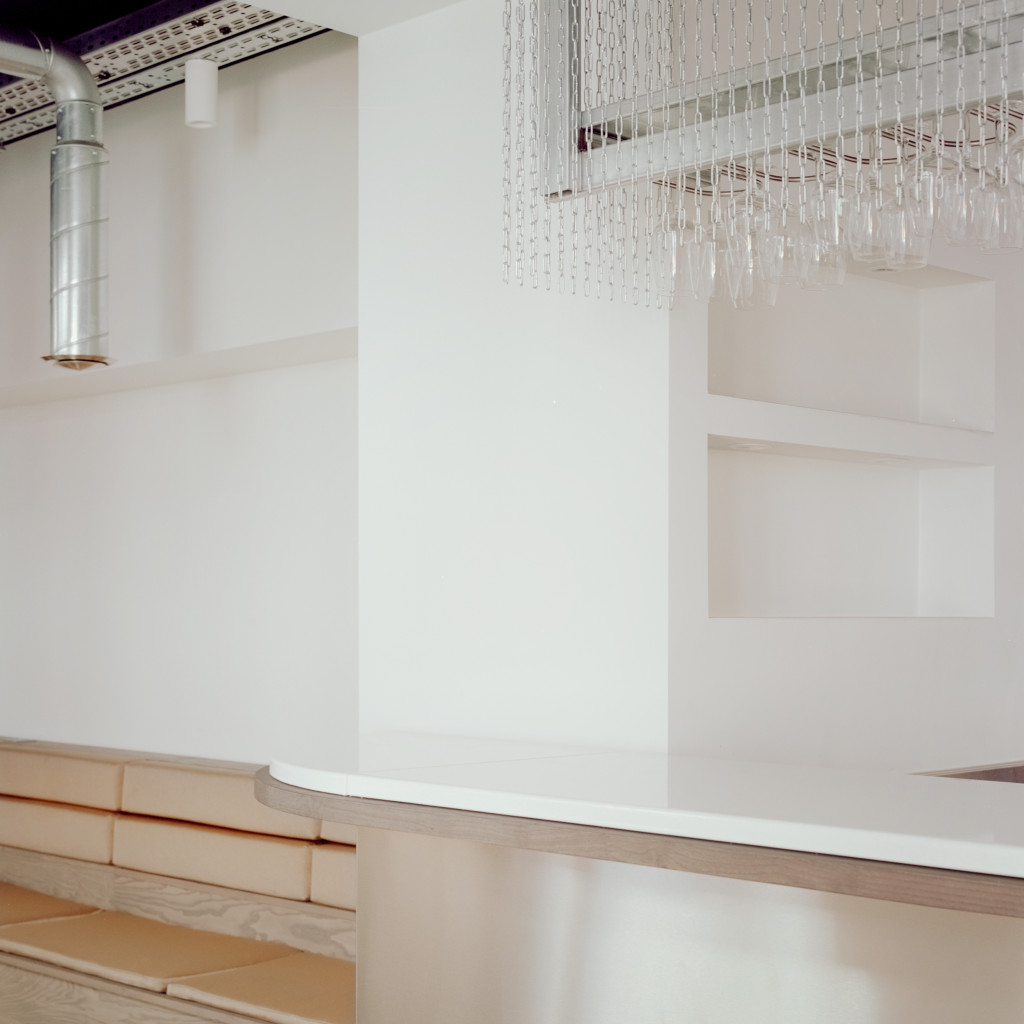 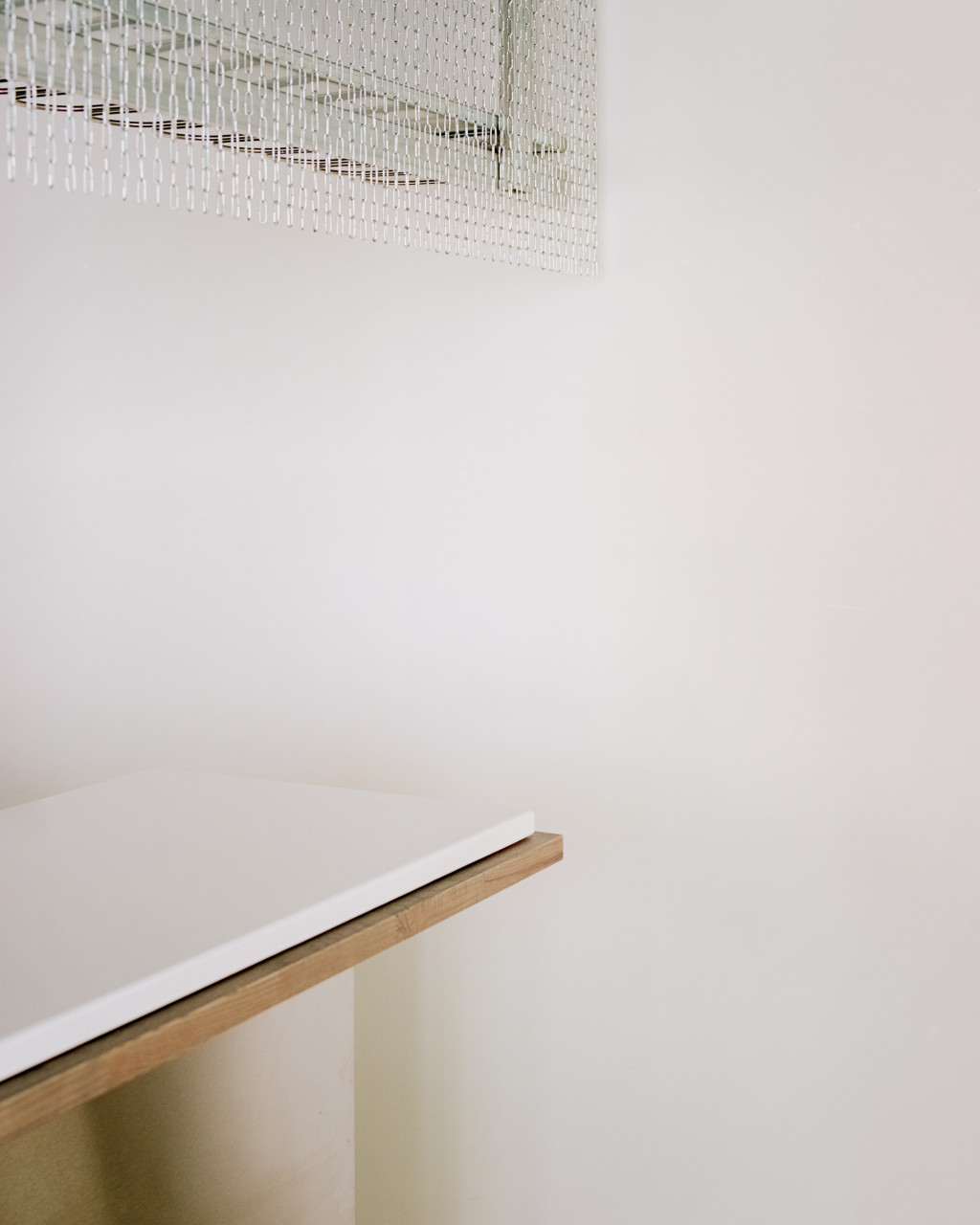 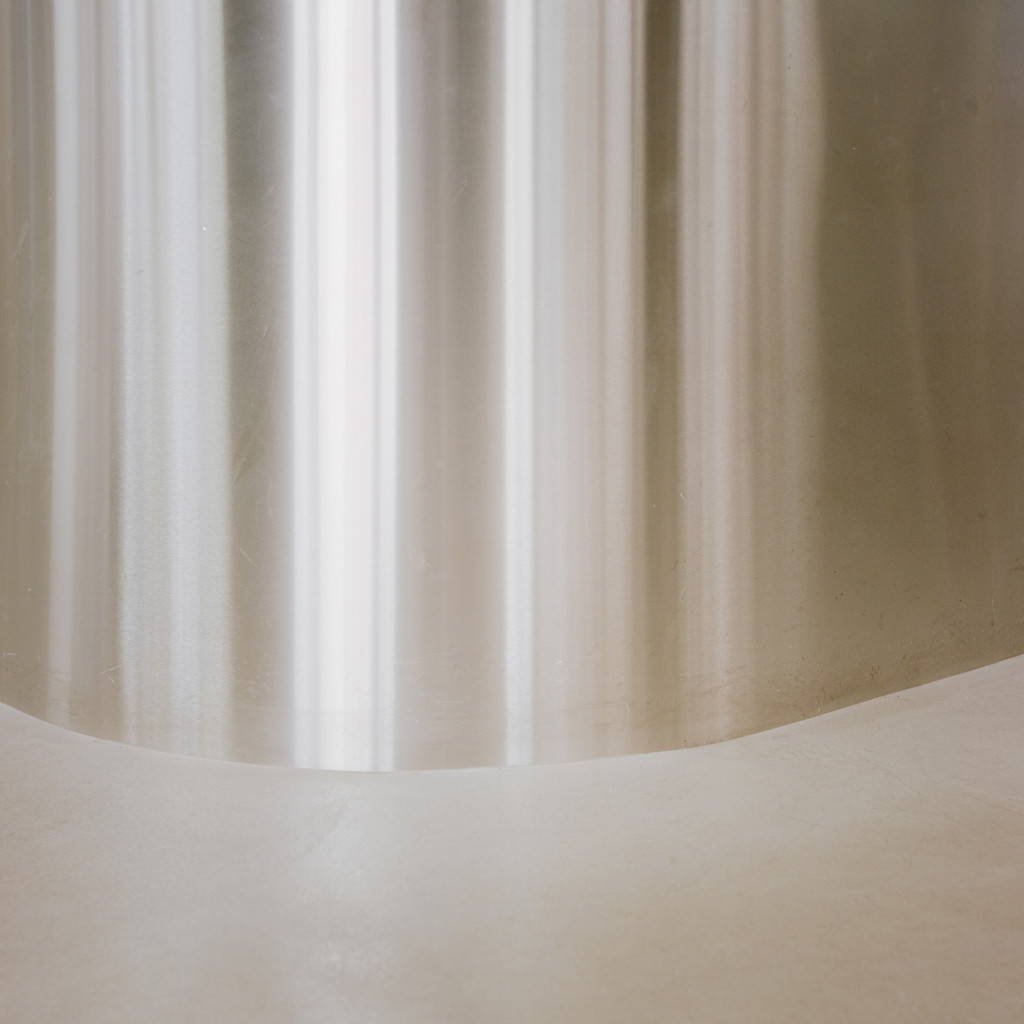 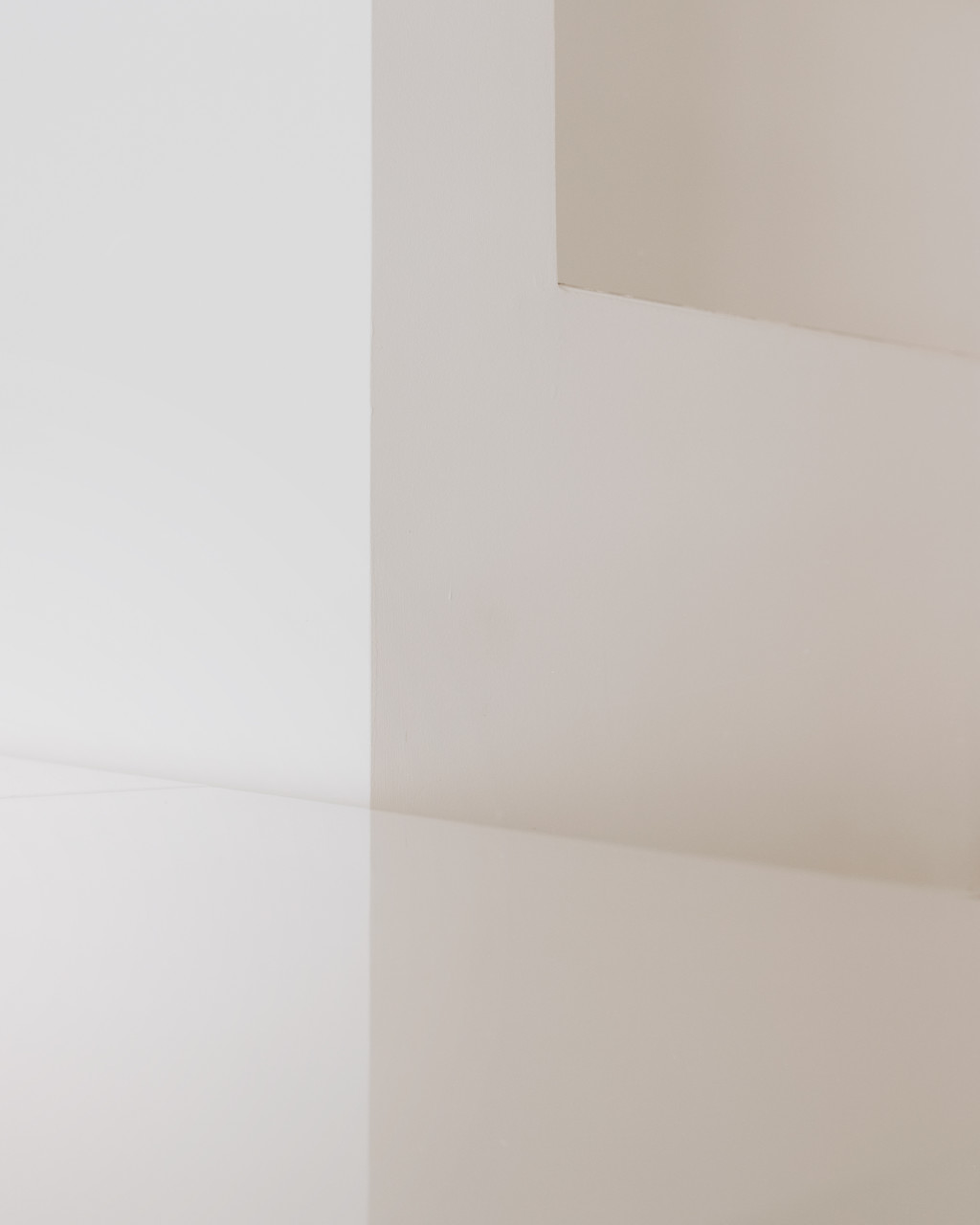 Thank you also to Morgane A.F., Anthony G. and Youjung L. for the confidence that was brought to the studio all along the process.